Most nights, I dream of someone trying to kill me. Morbid, I know, but I blame the PTSD.

Honestly, one of the worst symptoms of PTSD (for me) is the nightmares. The dreams feel so real; so vivid—it’s as if I am experiencing the scene at that moment. Sometimes I wake up sweating; other nights I wake up at 2AM from the panic of the dream, but most nights I wait until late evening to fall asleep because I’m too scared of what I will see in my newfound homicidal imagination.

Each night, as my night terrors interrupt my attempt to catch up on week’s worth of rest, I wake up from these dreams with an eerie sense of inevitability that I will experience another mass shooting. The more and more these dreams rattle my nightly rest, it seems as if the variety of the nightmares strive to prepare me for different survival methods in our inescapable world of violence. But, I am used to it—the dreams seem so normal now, I’ve come to expect them.

But what isn’t normal is the fact that I constantly fear the reality of surviving another mass shooting. These atrocities happen so frequently, that I have come to expect them in the same manner that I anticipate my nightmares. 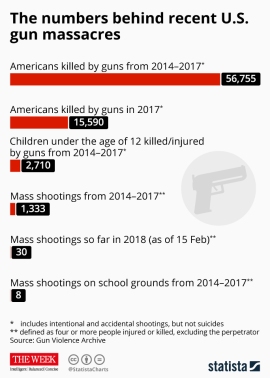 reduced to a statistical figure on television screens. Commemorated through Instagram and Facebook posts claiming “We Are [insert massacre here].” Used as arbitrary political talking points by gun lobbying groups and government officials.

But these people are real, and not obsolete figures. Survivors and victims experienced real traumas through mass shootings and will be forever changed by these experiences.

After all that I survived, the last thing I want to think about is experiencing another mass shooting in my own home country. The thought of having to hide under another dead body as mass-murders scavage through their victims, or almost suffocating through another bomb explosion is petrifying. But unfortunately, American society continues to witness the loss of lives in these varying atrocities, leaving citizens to battle a future of mental health issues in relation to the trauma they experience.

But I have hope…hope that a new generation of leaders will start to shine light upon the gravity of these tragedies. Witnessing my fellow Millenials and children from Gen Z coming forward not just at the March for Our Lives, but also standing-up to US lobbying groups and legislative authorities shows me that others are just as fed up as I am with these atrocities. These young leaders are refuse to take “no” for an answer and continue to fight to stay safe from guns in their everyday experiences.

While I know that one day my nightmares will begin to subside, I can only hope that mass shootings will follow suit in their reduction. All I can do is thank the youth agents seeking to spark societal change in American, and pray that they aren’t suffering extensively from the effects of their trauma. While I’m being optimistic, who knows, maybe one day I’ll wake to a court decision of banned military assault rifles and mandatory mental health screenings. In the meantime, I will continue to take my sleep one-day-at-a-time, and enjoy the nights where I sleep for more than 4 hours.