In the midst of a global pandemic, people (and for some reason, Carroll County Georgians) are still finding ways to propagate racism from the comfort of their own homes. Despite the numerous guides on how to make sourdough bread from scratch, or the participating in the “Toosie Slide” challenge like the rest of the world, two Georgia high-school seniors and a Bowdin High School student took to creating some perilous content of their own that led to their immediate demise.

The most infamous of these racist social media rants comes #TikTokTaylorAndTrevor, who decided to make a tragically uncreative video, spewing aged-old “watermelon and chicken-loving” stereotypes in their bathroom, while supposedly “making n—–s.” (So far, they have yet to be given a hashtag, so I thought I’d take the liberty of creating one.) The “comedic” video features pitiful attempts to reduce black people to absent fathers, jail time and poor decision-making. But joke’s on them because the Carrollton City School Superintendent made the decision to expel them just one month before their graduation, and many of their college and university acceptances have been rescinded. 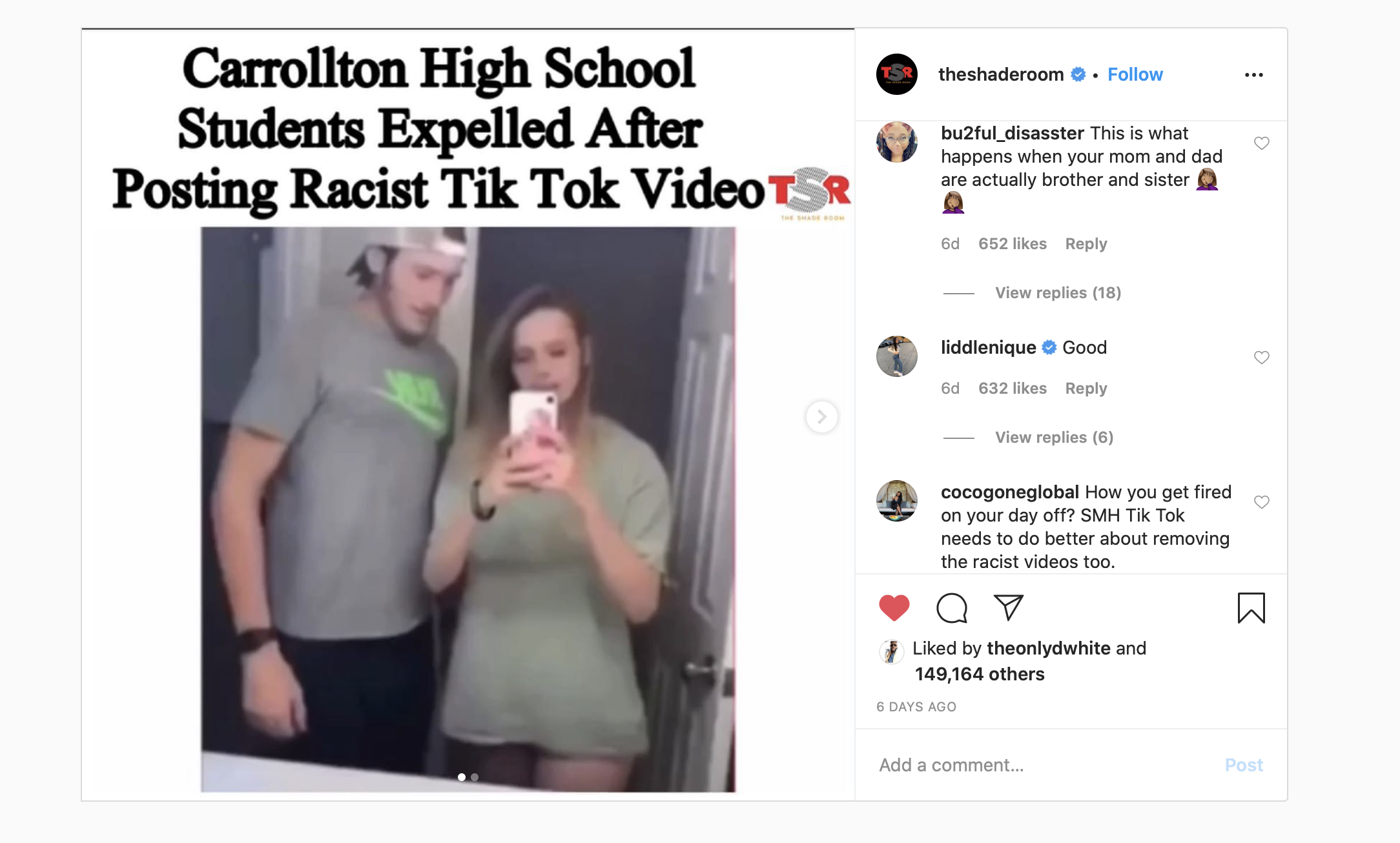 Somehow failing to learn from her xenophobic sidekicks’ traumatic online dragging, another K*ren headed to TikTok to let the world know “I’ve said Ni****, I’ll say it plenty of more times, I say it everyday of my life. I don’t give a God da** who that offended.” However unlike the other students, justice failed to be served as Bowdin’s school officials refused to address any possible punishment she may or may not receive.

As a proud member of Black Twitter, I eagerly celebrated the news of #TikTokTaylorAndTrevor’s demise in the initial viral backlash. It was not until the educator hat from my master’s degree in International Training and Education unintentionally materialized during a quarantine conversation that I realized how the school board’s hasty decision might have caused more damage than good. By solely choosing to expel the students, Georgia’s education administrators and their future colleges missed the opportunity to confront, instead of ignore, an unfortunately common bias in their school systems. By taking alternative measures, they’d ultimately promote these kids’ education development and prevent them from targeted hate group recruiting.

Over the past several years, white supremacists have been recruiting teens by exploiting their emotional vulnerability. By offering outlets to ease abandonment issues of kids with absent or uninvolved parents, offering a sense of sacred brotherhood, or even advertising to their fashion taste, members of the far right are capitalizing off of the experiences of marginalized white youth by offering them physical and virtual  “safe spaces” to spew their racist ideologies. As #TikTokTaylor’s feudal attempt at an apology where she said “I believe blacks are human too” was swiftly rejected by Black Twitter and both the students and their families face cyber-bullying and threats, the two are left psychologically defenseless as a result of today’s “cancel culture.” 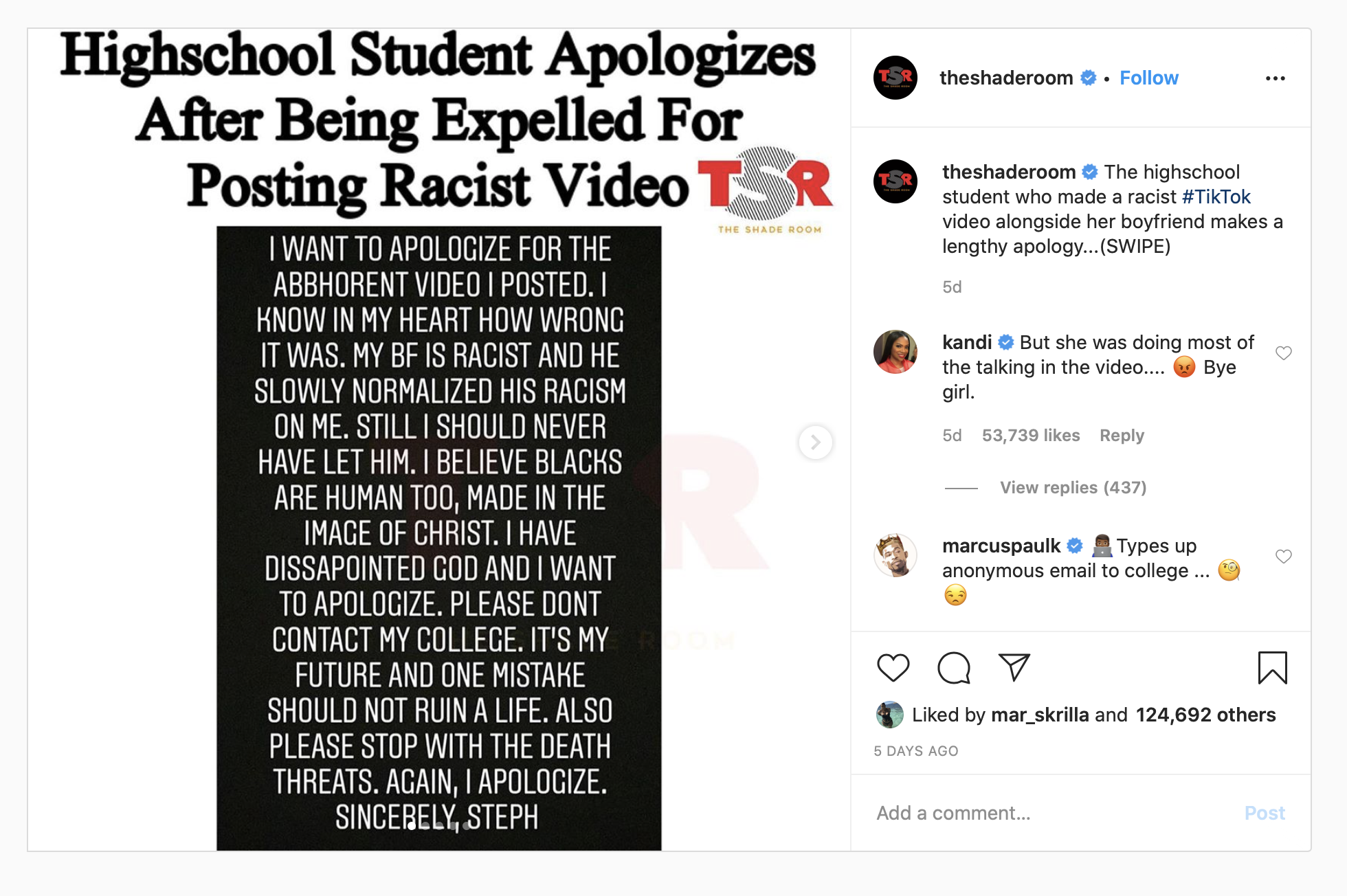 What the Georgia school system failed to consider is the possibility that their expulsion decision could leave those two students ripe to targeted recruiting efforts, where alt-right members could appeal to these teens by fostering a false narrative that minorities ruined their lives and that they should take pride in spreading content that denigrates racially inferior humans. Instead, the school system should move beyond punitive, non-corrective actions to implementing initiatives that create pedagogic, behavior changes in students such as restorative justice and intercultural education training.

Instead of leaving #TikTokTaylorAndTrevor wide-open to the preemptive purchasing of Kanye West-inspired confederate bomber jackets, I believe that a blend of participation in restorative justice practices and cross-cultural training could help the expelled pair move towards a productive path. Restorative justice practices emphasize the accountability of offenders to repair the harm done to community members when they meet and have a facilitated conversation. If the Georgia school system required the young adults to spend a year virtually conversing with members of the African-American and African-diaspora community throughout the US – with assistance from minority-run NGOs – to discuss the effects on of their actions, they could visually and emotionally connect with the pain they caused around the nation, in addition to participating in a resolution to repair the harm done.

In addition, to transform #TikTokTaylorAndTrevor’s prejudices, they could have taken part in an awareness, bias and sensitivity education series, where they could have  learned about the oppressive systems that led to black mass incarceration, the detrimental welfare policies that promoted the absence of father-figures, the nuances of colorism, and traditionally underfunded education systems; which would seek to educate and refute the callously-mentioned stereotypes in their failed, ill-informed attempt at fame.

Despite my suggestions to “un-cancel” and educationally enrich  #TikTokTaylorAndTrevor, Black Twitter might argue that K*ren’s and Ken’s around the world 1) finally need to face the consequences of their actions, 2) stop asking people of color to educate them about the impacts of their racism — which in some sense I agree. However, as an education practitioner and a Georgia native, I am didactically opposed to the concept of giving up on ignorant minds, especially in the cases of the teens whose brains have yet to fully develop. The adolescent brain has an “undeveloped processing center,” which leaves them unable to make complex decision making and lacking maturity. By simply castigating the two implies that they lack the ability to learn from their malicious misjudgments and removes future opportunities at the higher-education level to expose them to differing cultures and propels their continuation of narrow experiences.

Thus, before we collectively praise #TikTokTaylor’s white tears in her Instagram posts, or call for #TikTokTrevor’s burning at the higher education stakes, we need to take another look at the far-from-beneficial impacts that “cancel culture” has on ending future viral racist incidents. Instead of reducing the two high school students to another hashtag and advocating for their demise, education systems can promote their participation in restorative justice approaches and in educational trainings that focus on intercultural awareness, bias, and sensitivity to highlight their faux pas, while also encouraging responsibility for their actions that foster instructive behavior change.

Who knows, maybe if we move towards these models, we could prevent the next #BBQBecky or #PermitPatty situation and allow black people to be blackity black in peace without constant interruptions from phone-toting K*ren and or gun-wielding Ken.